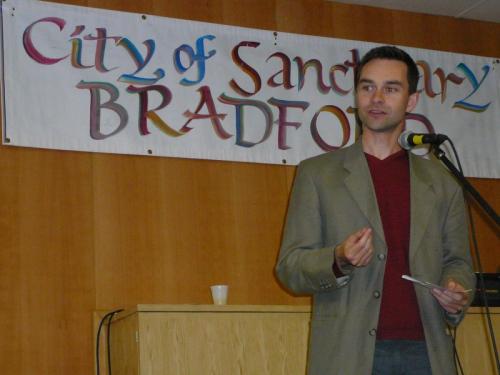 Almost 100 people from many sectors of the city gathered on 1st October for a hugely successful launch event.

After a wonderful meal cooked single-handedly by an asylum seeker lady from Iran, The Lord Mayor of Bradford opened the event with an inspiring message of support. Moving testimony, music and drumming followed by the Mussanzi family from the D.R Congo, whilst later in the evening Actors for Human Rights (www.iceandfire.co.uk) related the harrowing story of a Ugandan woman and her children in a powerful Asylum Dialogue.

Craig Barnett (Coordinator – pictured) and Inderjit Bhoghal (Chair) of the national C of S movement spoke passionately about the reasons why the movement came into being and of their vision for the future. Before leaving each of those attending was asked to write an ‘Action Idea’ on a leaf which was then pinned to a tree. The working group will use these as it takes the vision forward.