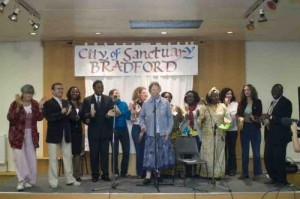 We are marking this important milestone with poetry, live music, food and dancing. The focus of the event will be to celebrate the progress made in the past decade in extending Bradford’s welcome and hospitality as a city to refugees and asylum seekers.

The event will be opened by the Lord of Bradford, Councillor Zafar Ali.  Cllr Ali has a positive tract record in the area of equality and racial justice.

Our special guest speaker at the event will be the award-winning poet Ian Duhig. Ian has kindly offered his appearance for free at this event.

As part of the programme we will be showing a vox pop video of local people’s experiences of Bradford as a ‘city of sanctuary’.

Will Sutcliffe, Chair of Bradford City of Sanctuary said:

“Wherever I go in the UK, Bradford is known amongst those working with asylum seekers and refugees as a place that genuinely seeks to welcome, support and empower those who have fled here from some of the world’s most dangerous countries. I am immensely proud of this city and the amazing work that is done here. Please join us to celebrate Bradford as a City of Sanctuary!”

We look forward to you joining us to celebrate the wonderful work of our tiny staff team, volunteers and supporters over the past decade. It is a FREE event and will be a great evening out. All welcome!

Cllr Zafar Ali served as a Magistrate on the Keighley/Bradford Bench for several years and was previously a Community Relations Officer for the Community Relations Council and eventually became the Director of the Racial Equality Council in Keighley before becoming a Councillor.

The city of Bradford has a proud history of welcoming and including newcomers from all corners of the world. Bradford City of Sanctuary was officially launched on 1st October 2008, with a vision to see this culture of welcome and hospitality extended to include those seeking sanctuary in our city. On 18th November 2010 Bradford became only the third city in the UK to be formally recognized as a ‘City of Sanctuary’. We were externally reviewed in January 2014 and once again Bradford was enthusiastically affirmed as truly a City of Sanctuary. We are part of a national movement in over 100 cities, towns, and villages, building welcome, hospitality and inclusion of sanctuary seekers in society.